Presentation by SciFabLab at Virtual Reality Software Technologies (VRST) 2014:  We aim to build up a low-cost prototype system for cognitive studies around a live 360 degrees vision. Have, e.g., an original broadcasting channel that could transmit and cover in real time a panoramic vision at a distance and with minimal computation. Have developed an optimized software  to run in mini-computers like Raspberry and Banana Pi, BeagleBone having a light GUI to easily configure the 360° visual field and activate the streaming signal. 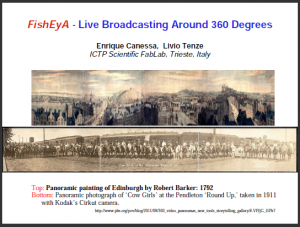